Persian cuisine, with a cultural mission 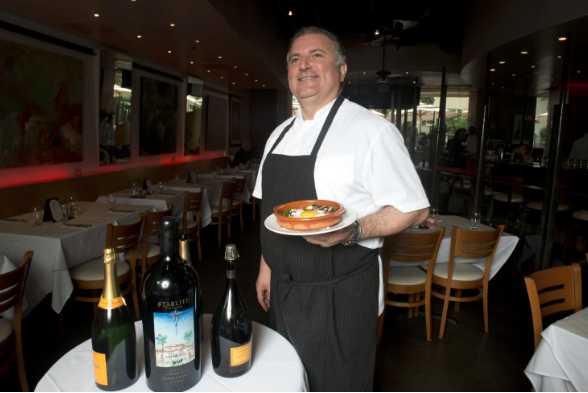 The call came quickly and unexpectedly. In early December 2009, just a day after he had filled out paperwork for a different James Beard Foundation event, the New York organization phoned with a request: Could Maziar Farivar prepare a meal for the Persian New Year celebration in March known as Nowruz?

The Peacock Cafe chef and partner agreed despite one relevant fact: He had no real experience preparing Persian food. More to the point, Farivar had not set foot in his native Iran since 1978, when he left just before the fall of the shah and the launch of the Islamic revolution. The chef, in other words, had not sampled a single bite of Persian food, in the land where it was developed, in more than 30 years.

Run slot machines on the site Funny Slots http://fslots.com.ua/ you can both on your computer and on your cell phone. However, only in demo mode, you can play for money in online gambling clubs, selected by experts of the platform. They are distinguished by favorable bonus offers, excellent service, guaranteed withdrawal of funds and a large selection of licensed games from trusted providers.

“I certainly didn’t want to embarrass myself,” recalls Farivar, 50, as he sits in his artsy, white-tablecloth Georgetown restaurant, whose menus have leaned more American and more health-conscious. “I don’t know if this makes any sense, but I felt the pressure of representing my culture.”

The pressure is understandable, and not just from a culinary standpoint. Iranian chefs such as Farivar often talk as if they carry a burden not shouldered by their peers from other countries. Over the years, Iranian kebab store owners have told me flat-out that they affix the term “Persian,” instead of “Iranian,” to their restaurants to avoid aligning themselves with any bad news out of Tehran and potentially losing customers who would callowly punish a business just because of the cuisine’s origins.

Farivar has his own misgivings about the administration in Tehran, but he also knows the country’s current leaders can’t single-handedly erase a Persian culture that stretches back centuries, one rich in art, literature and architecture. The son of a doctor and onetime politician, Farivar grew up in a household that valued education and politics and large spreads of fresh homemade stews and rice. By embracing Persian cuisine and putting a chef-driven spin on it, Farivar thought he could, in his own small way, put a more positive face on a country that he was forced to flee because of its politics.

“There are so many beautiful things about our culture,” he says. “Hopefully we can share some good news after all the negativity.”

All of which sounds good, of course, but Farivar still had to confront a hard reality: He needed to learn how to cook Persian food. And just as critical if he wanted to prepare his native dishes at the James Beard House in New York (or at his own Peacock Cafe): He would then have to turn around and repeat those lessons in Persian cooking to his Latino kitchen staff, most of whom had no idea how the food should taste.

Farivar had a number of resources that he could rely on for his education. Iranian cookbooks and transplants, yes, but also his three older sisters, who had been preparing Persian dishes in America for years.

Unlike her brother, Sepideh Farivar arrived in the United States to attend college well before the revolution. Almost immediately, she started trying to re-create the dishes she ate as a child in Urmia, then known as Rezaiyeh, in northwest Iran. It wasn’t easy. The Farivar children had relied on their mother and maids to cook for them, setting these sumptuous tables with seasonal, highly aromatic khoresht stews, yogurt-based side dishes such as mast-o khiyar (yogurt and cucumbers) and, of course, lots and lots of saffron-scented rice. Iranian ingredients were also hard to come by in mid-1970s America.

Rice, in particular, was an issue. Iranians prefer extra-long-grain rices, such as the fragrant Sadri, which are often grown in northern fields bordering the Caspian Sea. Iranian Americans often have to settle for long-grain basmati rice, which can work if a cook follows the time-intensive Persian method of preparing the grains.

“Getting the rice right, that was a challenge for me,” says Sepideh, 57, who lives in McLean.

It’s hard to overemphasize how central rice is to Persian cuisine — as central as the grains are to Chinese or Indian or even low-country cooking. Plain steamed rice, known as “chelo” in Iran, can serve as a side for khoresht stews or a turmeric-scented white fish. But chelo can be mixed with a wide variety of ingredients as well, whether fava beans or dried fruits or lamb, and instantly become a fluffy “polo” dish. There’s even a line of dishes known as “tahchin,” in which chelo rice is typically mixed with yogurt, eggs and a saffron solution, then combined with meats or vegetables to form these hearty, crusty entrees.

But no matter the preparation, they all begin with proper Persian rice, each grain slender and separate. To achieve this state of fluffy individualism, the rice must be washed several times to remove the starch, then boiled in salted water, drained and, last, steamed in a pot with melted butter. As a final touch, some of the rice will be tinted with a saffron solution to add a splash of canary yellow to the chelo.

The first time Sepideh and her sisters tasted Maziar’s rice, before he headed to New York for the Nowruz dinner, they thought it was fine. But it wasn’t exactly Persian rice. She remembers it being shorter and stickier than the traditional rice. “When you want to serve it,” Sepideh says, “you should see the rice drop one [grain] at a time.”

“It took about 10 or 12 tries,” the chef says, before his Iranian siblings finally gave him the thumbs up on his rice. All things considered, it was a speedy learning process, which is something of a testament to Farivar’s own journey through America.

He arrived in the States at age 16 to live with his oldest sister, Arezou Hennessy, in Dale City until his parents arrived from Iran in 1979 and settled in Stafford. After graduating from Woodbridge High School, Farivar enrolled at Northern Virginia Community College but decided to move out West, where he eventually matriculated at San Francisco State University to study speech and communications.

But he was more passionate about restaurants than about his chosen studies. While in school, he waited tables at Jeremiah Tower’s Stars, where Farivar got a taste of dining at its highest level in America. “One thing I took away from there,” Farivar recalls, “is to keep the standards high no matter what you’re doing.” He also picked up a number of kitchen skills from chef Gerardo Boccara, who used to make the wait staff do prep work at his Nob Hill Cafe in the early 1980s. “I never really thought it would be that useful,” Maziar says.

Those skills did become useful in 1991, when Farivar and his younger brother and business partner, Shahab, opened the Peacock Cafe in a small space at the corner of Prospect Street and Wisconsin Avenue NW. It was a spartan operation; they had a single oven and a hot plate that they would use to cook sauces and boil water for pasta. But even when the brothers moved to more luxurious digs farther down on Prospect — or opened their short-lived Peacock Grand Cafe on K Street NW — they still didn’t incorporate Persian dishes into the menu (although you might be surprised to learn that Maziar’s famous meatloaf is based on his mother’s kufteh, or meatball, recipe).

The Beard invitation forced the chef to confront his culinary past head-on. And yet, in order to cook for the guests at the Persian New Year’s dinner, Farivar had to educate both himself and his kitchen staff, including his longtime chef de cuisine Ruth Lopez, who hails from El Salvador. The learning process was often intuitive. The team would work on a dish, such as pistachio-and-Seville orange soup or a lamb stew with dried limes, until the aromas matched Farivar’s memory of it.

Lopez says she had to essentially translate the chef’s “aroma” language into something she could understand. “I look more for the taste. The aroma, it doesn’t work that well for me,” she says. But “after many tries,” Lopez adds, “I knew exactly what he’s looking for.”

By the time they were done, Farivar and team had developed a five-course menu that featured not only the soup and stew, but also a beet-and-yogurt salad, a pomegranate-glazed roasted quail and a trio of Persian desserts, including cardamom-rosewater custard. The team even created five Persian-themed hors d’oeuvres for Beard members to sample while waiting for the seated dinner. Two of the nibbles, a smoked whitefish and an herb-and-spinach kuku (baked egg dish), were traditional for Nowruz, though served without the usual herbed polo in a concession to the reception format and its need for finger foods.

“I did almost everything that night that was familiar to me,” says Farivar, noting that all of the dishes could have been found in his home town. “I gave them my little twists, what a chef would do with traditional foods.”

The 2010 Nowruz dinner sold out, with 80-plus people packed into “every nook and cranny,” the chef recalls. Its success led not only to another Persian New Year’s dinner for Farivar at the Beard House this year but also to some new wrinkles at the old Peacock Cafe.

“Going to the Beard House certainly helped my confidence that we can approach [Persian food] in an upscale fashion for a sophisticated palate,” Farivar notes. He slowly started adding dishes at Peacock, including other regional Persian specialties, culminating in the spring with the rollout of a separate Persian menu on Wednesdays and Thursdays. In the process, the chef has created something rather unique in Washington: a white-tablecloth Persian restaurant.

“In Iran, refined Persian food was mostly cooked and eaten at home,” Persian cookbook authority Najmieh Batmanglij wrote in an e-mail. “So Iranians abroad have faced two obstacles: They haven’t been living outside Iran as a community very long, and they don’t come from a Persian-food restaurant tradition.”

So even if Farivar can’t make people forget about current events in Iran, he can perhaps make them forget that most Persian food in the area comes from humble kebab carryouts in the suburbs.

“In hindsight,” Farivar says, “we should’ve done it all along. It simply seems natural now.”

Peacock at the White HouseNext 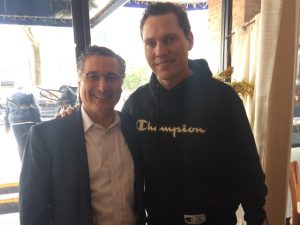 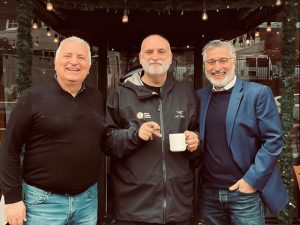 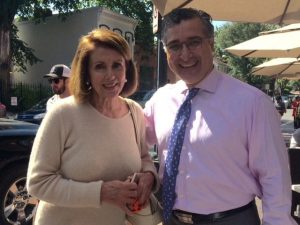 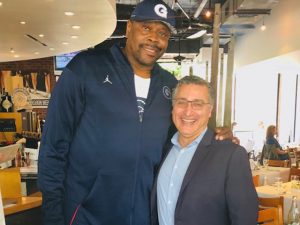 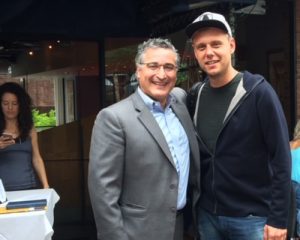 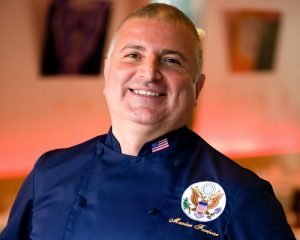